Frashokereti is the Zoroastrian belief of final judgement, wherein evil will be purified and good will meet with God in his 8 forms: The Gods and demons will fight, melt all the metal in the hills into a molten river, through which all humans will have to wade, either passing through unharmed or being ‘purified’ out of existence.

After Frashokereti, those that are deemed worthy will live free of need and pain, will speak a single language on a unified earth, and will be so light in form they will literally cast no shadows.

So Zoroaster (man or myth?) was led,
By visions of Lord Wisdom multiform.
He taught the people good will win, and said
‘Your acts and thoughts are yours alone’. Forlorn
and fraught, we know our freedom means our ilk
must choose the end for all. Gods fight, and torn
they must melt metal from the hills, like milk
to most. Though swaling those still deemed unfit:
they’ll burn in rivers many treat as silk.
While after judgement none shall have to split:
No need for state, or food, or drink, or bed.
One voice to sing, and love, and laugh, well lit.
So Zoroaster (man or myth?) was led,
But never told the people ‘God Is Dead’.
Just that we choose to whom we will be fed:
The evil maw, or mouth of bliss instead.
PH-R 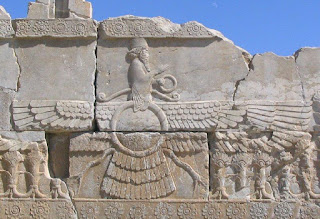 Posted by AndyBennettPoet at 10:00 AM