In February 2012, four poets unwittingly embarked upon a challenge: to write 28 sonnets, one every day for the entire month of February. Unfortunately, they forgot that it was a leap year. But, they persevered, and what started out as a strange and exciting odyssey quickly blossomed into something bigger. Better. More shiny.

Last night a pamphlet including all 29 sonnets was launched in Norwich at the Birdcage in Pottersgate. It was a great night, with all four poets performing a selection of their sonnets, in front of a select and appreciative audience.

Released with deadbeat press, the pamphlet is now available to buy and own. Copies of the pamphlet can be purchased now from http://deadbeatpress.bigcartel.com/ 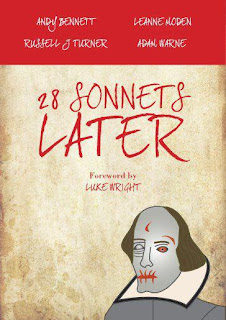 Posted by Crimson Ebolg at 7:29 PM