After 'In Goya's Greatest Scenes We Seem To See' by Lawrence Ferlinghetti.

(It's probably worth you looking at some Goya paintings, too)


In Goya’s greatest scenes, what do we see?
A firing squad that interrupts a party;
A maid in varied states of nudity;
The havoc caused when giants get all farty.

Gymnastic dunces floating in the air,
suspended in the black like twisted puppets;
Infantivorous deities who stare
with googly eyes just like you find on Muppets.

I see these scenes, my pits and palms all sweaty,
and thank the stars that I ain’t Ferlinghetti. 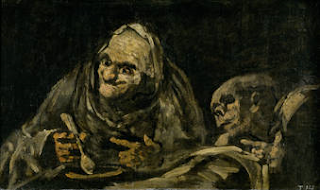 Posted by AndyBennettPoet at 9:23 AM