That beamish boy, who'd slain the beast,
Was remanded, then, in custody.
(Though there were those that trusted he
Would soon be, from his cell, released.)
The Jabberwock: species deceased.
The activists spoke out disgustedly.
The original tale now viewed mistrustedly
And rumours of foul play increased.
The trial loomed, the boy was fined.
The jury yelped 'Callooh! Callay!'
Animal cruelty lists were signed,
His vorpal sword was wrenched away.
And to this day, no Jabberwock roams
Among the mimsy borogoves. 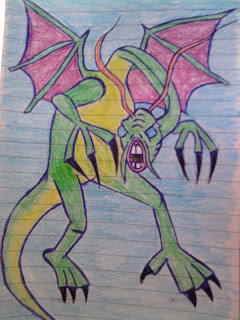 Posted by Crimson Ebolg at 8:32 AM